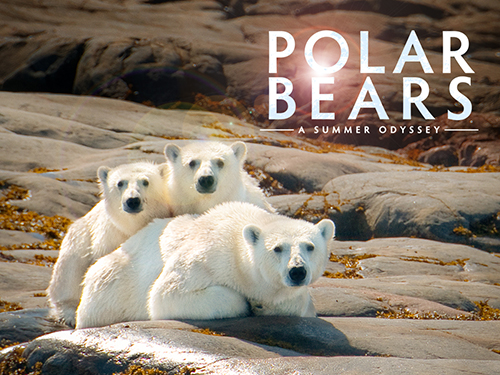 Shot over twelve months, this blue chip wildlife documentary tells the story a young polar bear’s epic migration through the icy waters of Hudson Bay and his subsequent adventures on land, where he must spend the ice-free season. It is his first summer alone without his mother to guide and feed him. His struggle to survive is set against the biggest environmental story of our time: climate change.

When we think of polar bears we think of snow and ice, but for thousands of years, the polar bears of Western Hudson Bay have spent their summers on land. As the ice melt they are forced to migrate over hundreds of kilometers using the stars. Their mothers teach them. It is a route that they will follow for the rest of their lives.

As the ice-free season grows longer, so does the amount of time they must spend on land. With little or no food, hordes of biting insects, and intense pressure from other bears – it is unbearable!

Bear stalks thick-billed murre colony.
As the summer progresses the stakes get higher for our bear. This is one of the hottest summers on record – he’s a white bear in a green world. A polar bear’s curiosity, memories and intelligence are his only defense against a world changing faster than he can. Can polar bears adapt?

Watch the desperate acts of a bear pushed to the brink. Witness the wisdom and commitment of a protective mother bear. Observe the seemingly ferocious social rituals of massive male bears. Polar Bears: A Summer Odyssey features breath-taking cinematography capturing rarely seen bear behavior including the young bear climbing a 250 meter cliff in search of a meal and a bold male who has learnt the art of hunting walrus.

The stunning images, captured by the Canadian team of Adam Ravetch and Sarah Robertson, were taken with more than eight different kinds of cameras including, for the first time, a polar bear collar-cam; a remote control Truck-cam; a mini Heli-cam, and several underwater cameras.