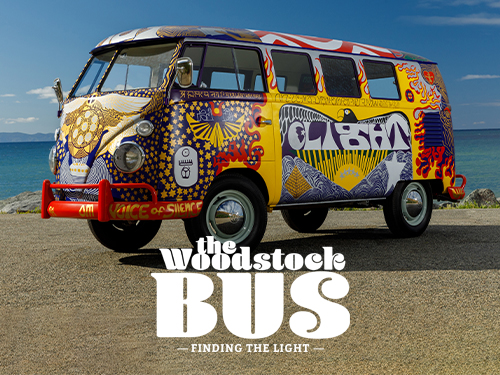 To celebrate the 50th Anniversary of the Woodstock Festival, we’re working with the original artist to resurrect, restore and repaint the Woodstock “Light” Bus. A Volkswagen bus that became the symbol of a generation at the famous festival in August 1969. With this series you’ll find history and future combined. It’s art. It’s an icon. It’s a journey. But most of all it’s an opportunity to give everyone something to smile about.Woodstock. The most famous rock concert in history. The symbol of a generation. At the centre – a Volkswagen bus called Light. An unlikely crowd comes together on an epic search to help an aging artist resurrect his greatest work, a symbol covered VW bus, known as the iconic emblem of the Woodstock Music Festival. It’s the most valuable piece of American automotive art ever. There’s just one problem. The bus is missing. It’s a race across America’s highways, backroads and junkyards to solve a 50-year-old mystery: find a bus, restore it, and repaint its artwork in time for a trip back to the Woodstock 50th anniversary Jubilee. Travelling from VanLife subculture to the high stakes world of classic automobile investing, it’s a journey to get the lost symbol of a generation back on the road and into the Light.