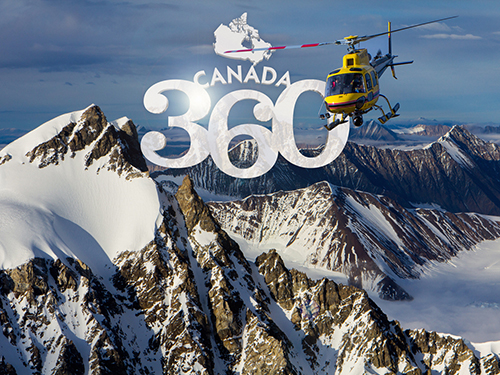 A 5-year, 20,000 kilometre circumnavigation over the longest coastline on earth, from sea, to sea, to sea.

“Canada 360” is an epic adventure – a first ever, five-year circumnavigation of the world’s longest coastline. This never-before-seen view of Canada from above – narrated by documentary director Andrew Killawee – reveals the secrets of Canada’s 3 coastlines, and its southern border with the USA.

Beginning in Halifax, Nova Scotia – on Canada’s East Coast – Killawee and the “Canada 360” team spend 2 years filming more than 40,000 kilometres of rugged shoreline in their own backyard. From there, the team heads North – and deep into Canada’s past – a year spent along 160,000 kilometres of Northern frontier – from the communities of Pond Inlet and Arctic Bay on Baffin Island, to the Yukon-Alaska border. Heading south, the wonders of the Yukon-Alaska frontier are revealed over a year of shooting: from the islands of Haida Gwaii, to British Columbia’s stunning mainland coast. Finally, Canada 360 heads home along our southern border – tracing the winding rivers, mountain ranges, and 49th parallel that mark Canada’s boundary with the United States.

On the ground, the team explores dozens of communities, from Canada’s major metropolitan centres to its tiniest outposts – Toronto to Tuktoyaktuk – meeting hundreds of ordinary Canadians. It’s a thought-provoking journey – exploring the big questions that define Canada.